So this weekend was kind of a big deal!

My family camped pretty regularly when I was small and I backpacked solo (plus dog) during my college years. I had wanted, for a while, to thru-hike the Appalachian trail. Instead I bought a horse, which pretty much consumed the next decade!

But I’ve been thinking. Toying with the idea. Standing on mountains looking down into forest and pond and wanting, even while I appreciated the wide-open view, to know what was down below.

But there were complications. Missing highly relevant pieces of gear now that I’m living in New Hampshire instead of Illinois. Titus’s injury and then Titus’s inability to sleep in the presence of humans. Weather. Fear.

And then: this weekend. An invitation to join some friends at Flat Mountain Pond. A small, accepting, dog-loving crew with whom I felt safe enough to ask dumb questions, break out my 15-year-old gear, and believe would still like me even if a certain darling cattlefrog chose to bark all night.

I opted to start a bit after the others in the name of getting enough sleep (and to hike off my jitters without inflicting them on anybody but the dogs!). And I was a bad hiker: I looked at the map and skimmed the book description for water crossing info and obvious red flags, but didn’t bother to check the elevation gain. So I was a little surprised by hitting a short but bracingly steep stretch of trail! But I’ve been wanting to get a little more climbing into the dogs. And myself!

I was especially proud of us all at the numerous water crossings. I worry about water. It’s an easy place for something to go badly wrong. But we were calm and methodical. I focused on the task and my foot placement and never felt uncomfortable, even when navigating some awkward spots. Titus handled his temporary off-leash privileges without making me regret them and when I opted to keep him leashed crossing, never made me regret that, either. And Lilo, who I used to have to baby across, was cool as a cucumber.

And when we reached the pond, our friends were there and we otherwise had the place to ourselves. That was exciting for everyone!

Fog lifted and settled and lifted again for the entirety of the trip. Sometimes we had stunning views, as above. Sometimes the pond, peaks, pines were enshrouded and those stumps seemed to float in midair. There was no bad options and the constant gentle shift was fascinating to watch.

My gear was a mishmash of new equipment (like the Ursack bear bag that I used, with odor-barrier plastic bags, to protect my food), dayhiking stuff that I’ve acquired along the way, and my Kelty external frame pack and Walrus tent that my parents gave me high school graduation presents back in 2000.

The tent is a heavier than comparable modern tents, but pretty bombproof and — it turned out — more spacious than I had remembered. Two humans would be stretching it, but one human and two dogs worked just fine!

And the pack felt like coming home. I wouldn’t want to carry it on technical terrain, but for this, it worked just fine.

We do need to dial in our sleep system aside from the tent. The dogs were comfy, but I wanted more sleeping bag than I got!

And I really need to solve the bugs-biting-my-short-haired-dog issue. The flies and mosquitoes were vicious this weekend. All four dogs felt it, but poor Lilo was the only non-cattle dog on site and thus the easiest target by far. I’ve been utterly unimpressed by the “natural” sprays that I’ve tried in the past and she hates them besides. A Vectra trial last year was uninspiring. And I’m reluctant to use my own sprays on a creature that licks herself.

If the budget was endless, I’d put her in a Hurtta Sun & Bug Blocker and pick up doggy sleeping systems for them both. But alas, I have my limitations and I’m not sure the size chart accommodates her, to boot. So I’ll keep thinking. And I’m very open to suggestions if you folks have solutions that work for you!

I was really impressed with both dogs. They hiked beautifully in both directions and were generally good citizens in camp and in the tent. Cosleeping in the bedroom at home is still an ongoing process, so I was especially leery about the latter — but they slept better than I did! I’m not totally sure I should celebrate that, but hey. 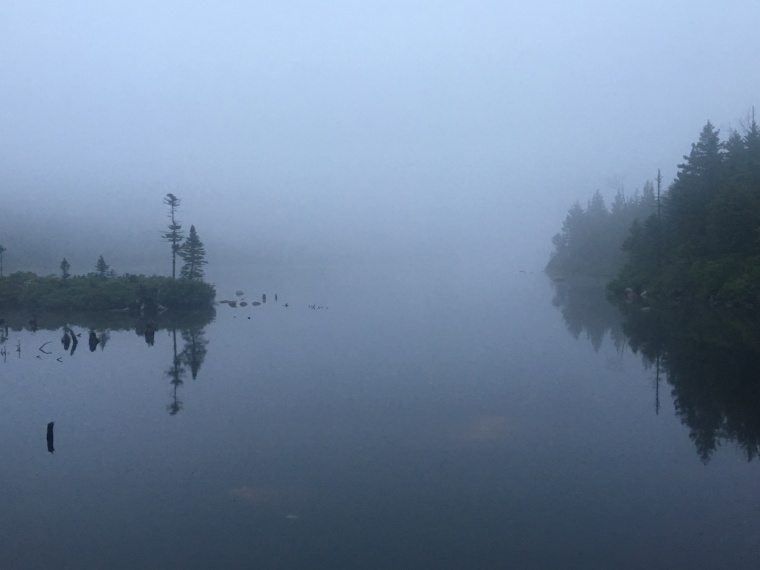 As for me, I can’t remember the last time that I spent so long just sitting still, resting and relaxing, enjoying the company of friends and enjoying the company of myself. I’m doer and a goer, by nature and having Titus has both exacerbated and made me reevalaute those tendencies. I don’t rest very well when left to my own devices. But the weight-carrying hike in, the excellent and mellow company, and the perfect peace of the setting all worked its magic on me. For a day and a morning, I was able to let go and just be still.

And then walk back out again! I left ahead of the others on account of the very warm forecast; I wanted as much of Lilo’s hiking as possible done before it got hot. We timed it right, I think. In the last mile I was sweating even hiking downhill, but never really uncomfortable. Titus, who is the least fit of us currently, finished up tired but game. And Lilo actually seemed to get stronger as she went along (although she’s holding down the couch pretty well right now!).

Now we rest, recover, regroup. I’m not sure what or when our next outing will be. But there will be a next outing. For now, that’s enough for me.