Sorry, guys. I just kind of ran out of words for a while after the election.

Dogs and hiking have been a great comfort, though, and I’m glad to have both in my life while I sort through what my other contributions to the world going forward ought to be. And this little hike actually took place the weekend before the election, which now feels like an awfully long time ago…

Titus was doing well enough by the weekend after his surgery for Lilo and I to sneak out to tag our penultimate Belknap Range peak. That was Whiteface, not to be confused with the 4,000-footer of the same name in the Sandwich Range.

The lower portion of our route was a wide, gently-graded, deeply leaf-littered trail that Lilo found inexplicably spooky even before we reached the remains of a collapsed cabin. A landowner’s dogs had been loose by the parking area and come over for a visit; Lilo handled that well, but it’s possible that her getting a bit “stuck” in the first mile was an artifact of that stressor. She was willing to be jollied along, though, and brightened up as we reached the low stone wall marking the turns left to Piper and right to our destination.

The top of Whiteface is wide-open and on this day, we had some lovely views down to nearby towns and lakes, to clouds and sunbreaks, as well as to rain over the White Mountains farther north. I’m not normally one to linger for long on the summit, but this just felt like a good place to be on this day, with the last vestiges of autumn foliage spreading out to every side. 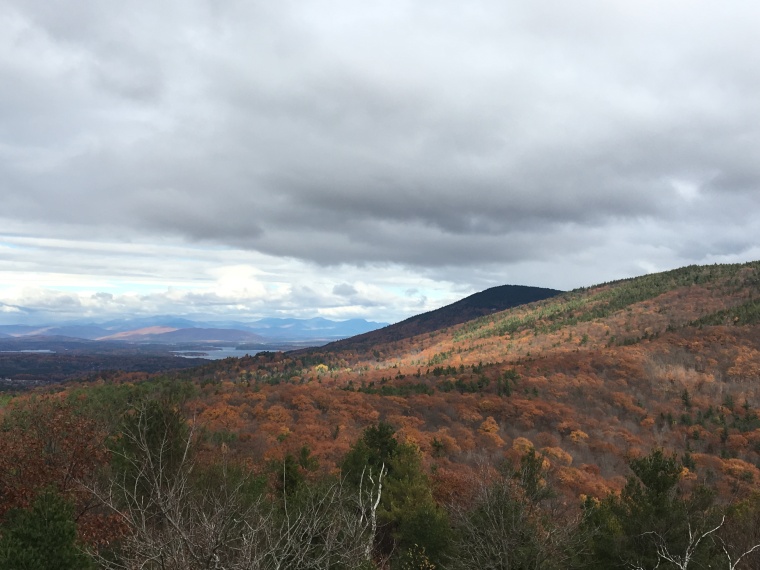 We also ventured over the summit and a little ways down the other side in search of a rumored herd path to the cliffs that give Whiteface its name. I hadn’t taken good notes as to its location, though, and didn’t want to venture too far off the beaten path without better intel. I investigated a bit further on returning home; we’ll be better prepared when we return.

We’ve since finished off the range in a much-needed jaunt to Round Pond and Mack with friends the following weekend, so that story will be up soon, maybe with a few more words in it!

2 thoughts on “The Other Whiteface”

Tell Me A Thing Cancel reply